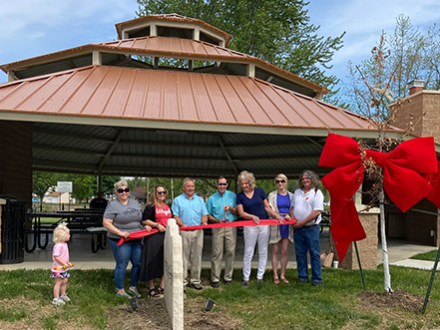 The Wapakoneta Area Chamber of Commerce led a dedication and ribbon-cutting ceremony for the city’s Heritage Park, Saturday, May 22. Jackie Martell, executive director of the chamber, gave the opening remarks, while Mayor Tom Stinebaugh and Manager of Engineering Mary Ruck gave additional comments. Garmann Miller’s site designers partnered with Wapak’s team for over a decade on the riverscape, and according to Kathy Trejo, GM landscape architect on the project, it was an exciting day to celebrate its completion.

“The businesses on Auglaize really have two front doors, and we wanted to be a part of strengthening the one on the river side,” Trejo said. “Wapakoneta is lucky enough to have a river flowing through its center, and the goal was to gain people access to it. It is our strong belief that parks such as this play a large role in downtown revitalization.”

Located on the south side of the Auglaize River, Heritage Park was enhanced to include a new shelter house complete with restrooms and a fireplace. Garmann Miller’s team contributed architecture services in collaboration with Choice One Engineering, civil engineering, and Helms and Sons, general contractor. Heritage Park is one component in the overall riverfront project made possible through funding from the Ohio Department of Transportation.

Additional pieces of the project include Belcher Park with a canoe launch, parking, a playground, covered picnic tables and a natural edge to the river. There also are 3,000 feet of multi-use paths connecting the two parks with plenty of additional green space.

If you haven’t explored the recently completed project in downtown Wapakoneta, you should consider taking the time to do so. While you’re there, be sure to read the illustrated signage that explains items such as the Quaker quilt pattern in the plaza at the shelter house, the Native American blanket pattern at the river overlook and the white flags along the river.

For more information on the dedication and ribbon-cutting ceremony, read the full feature from The Lima News.